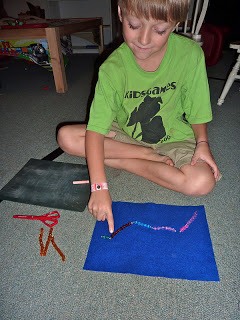 I worked on the first montessori Addition Snake Game for a few days last week with Anthony, I had been setting the game up for him during those lessons and didn’t get any pictures. This was the first day I had him set the game up on his own and he didn’t really plan what beads he was going to add to his snake, he chose what ones he thought looked good together, lets just say he learned a couple lessons. Because I was letting him do the lesson on his own I was able to get some pictures in.
I love the big smile on his face in this one, he really enjoys working with the Montessori Beads. He started out by counting the bead bars to equal 10. 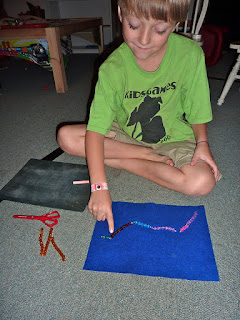 Here he replaced the 8 and 2 bead bar with the 10 Golden Bead Bar and also wrote the problem on the little chalk board, showing the problem he did. 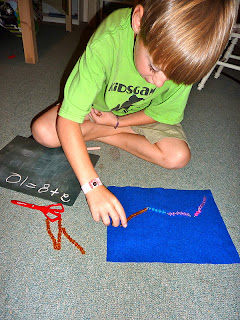 I noticed the last 2 parts of his snake were not going to equal 10, which we haven’t covered yet. I just sat back and watched, waiting for the wonderful self correcting of Montessori, and this was the moment. He had 11 beads instead of 10.  Anthony is our very animated child, and these pictures sure show that I just love his expressions! 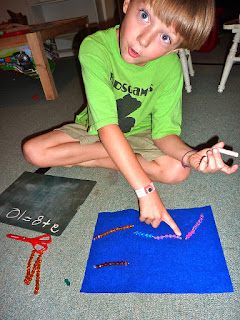 He quickly fixed his mistake, recounted to make sure he had 10, replaced that with a golden 10 bar as well, and added it to his chalk board. 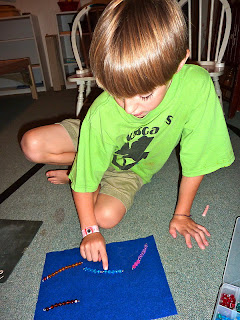 He then proceeded to the last part of the snake and realized he only had 9 beads and not 10 like he was supposed to have. 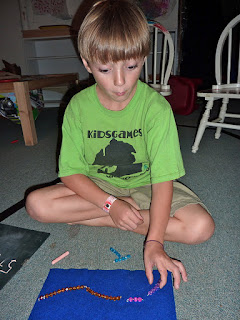 He fixed his mistake on his own again, and recounted to make sure he had 10. He was so pleased with his work, and this picture is such proof! 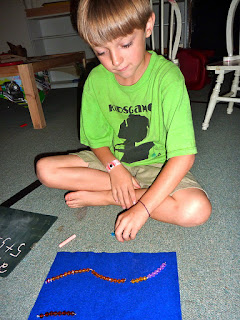 He added his last problem to the chalk board, and then added the snake “head” (the red 1 Bead Bar) which he loves to do at the end! 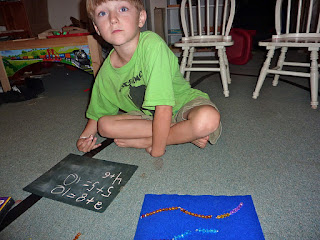 Next week we are starting on addends that do not equal 10.
I am linking up with Montessori Mondays