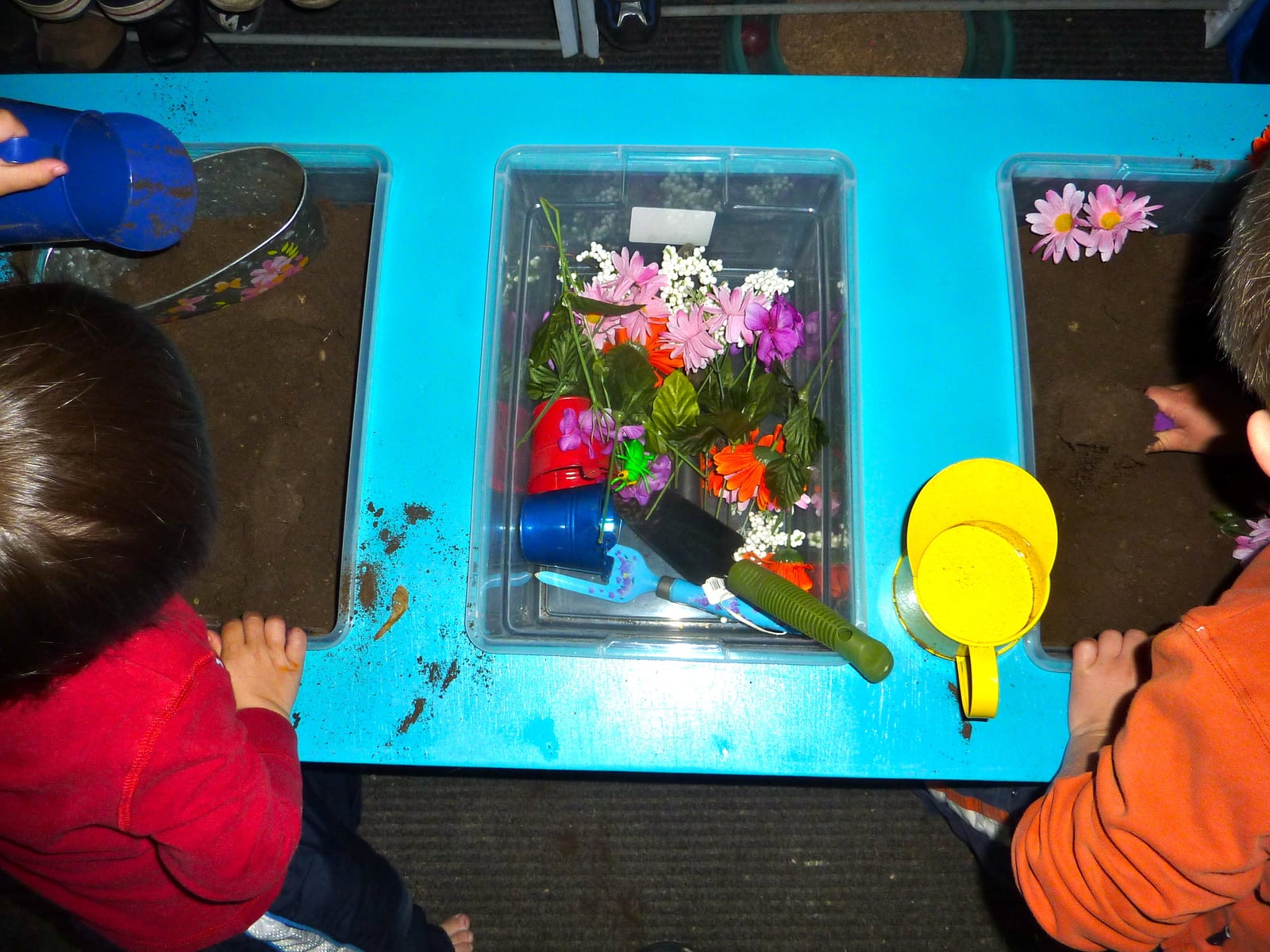 1038shares
The last couple weeks there has been lots of behind the scenes work going on around here! Last weekend has been the start of some new projects, I have reworked the school room and ended up splitting our school room into an area 1/2 the size we had before, and then turned the other half into a sensory area. Jake has been so wonderful and built everything that I have asked him to build some way or another!  I did this project for a couple reasons, first Gabe has pretty much given up his naps and it will hopefully keep him busy on the afternoons it’s to cold or rainy to go play outside, with him busy, we can still get our afternoon study time in without so many interruptions. Second with 5 boys in the house, they really just need somewhere they can go and get their energy out during the cold or rainy days. So with that being said I have a lot of DIY projects my wonderful hubby has helped me to get accomplished this this past weekend and week, to help fill the sensory room that I will be sharing in the next couple weeks!
Our first project I’m sharing is our Sensory Tables, I have had 2 different pins on DIY sensory tables on Pinterest that looked easy and inexpensive enough to build, that gave us inspiration to build our tables.
The first one is from Teaching Preschool,
The second came from Bumble and Bean
I printed off both posts gave them to hubby and he went to building. My goal was to make 2 different sensory tables, 1 for the sensory room downstairs, and 1 to be able to use outside.
Both of our tables were built the same way, the only difference was that on one of the tables we put 2 sensory tubs and the other has 3. Here are the steps we followed to build both of the tables.
Materials Needed:
2’x4′ sheet of wood we used a birch 1/2″ sheet of wood
2 – 2×4’s
2- 2x2x36
Saw
box of 2 5/8″ Screws
Wood Putty
Paint (in whatever color you want the table)
Cost of the project was about $40, for both tables. We also has extra wood left of our sheet of wood and will be able to do a couple more projects using that wood.
First we cut all the boards to size, he cut the table top to the proper size of 2’x4′, next he cut 2 2×4’s 48″ long, and 2 more 2×4’s 24″ long, lastly he cut 4 2×2’s 22″ long (for the table legs) 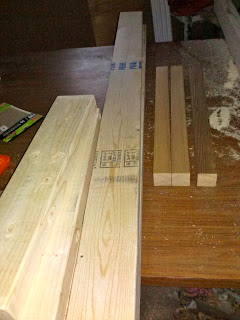 After the boards were cut he put the frame together, using the screws to attach the 2 long (48″) 2×4’s to the 2 smaller (21″) 2×4’s making the rectangular frame for the table. After the frame was made he attached the legs to the frame, we purchased 2x2x36’s so he was just able to cut both of them in half and had the 4 table legs, each leg being 18″. You could also get prefab table legs, but they cost to much more than the 2×2’s for me to go that route. 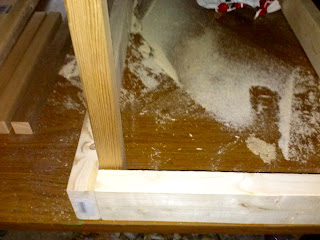 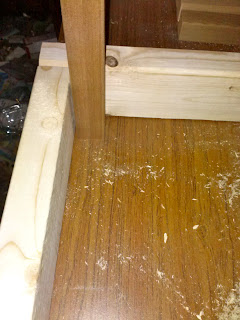 After the legs were attached he added 2 more 2×4’s to the frame of the table for stability, making sure to leave enough room for the tubs to still fit in place. 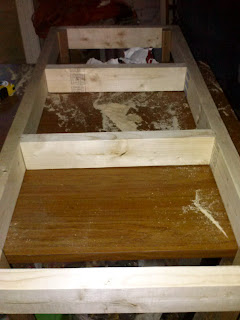 After the frame was put together he laid the top in place and secured it with the screws. After the top was on he drew the lines where he needed to cut out the holes where the tubs would be placed. 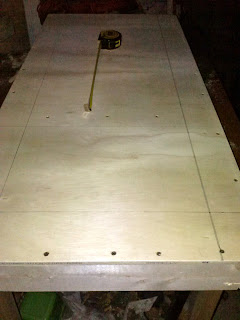 Here is the first one after Jake is done with his work on it, he was so wonderful and sanded around the edges for me so I didn’t even have to do that part. My job was to fill the screw holes in with wood putty, sand the putty down, and then paint both of the tables 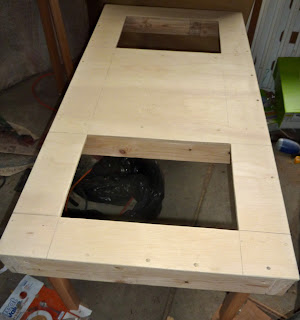 Here is the first table, I chose to paint it Red and have white legs, this is the one that will be used outside, I wanted 2 different bins in this table with a work area in the middle, so the kids can set their toys and work somewhere other than the ground. 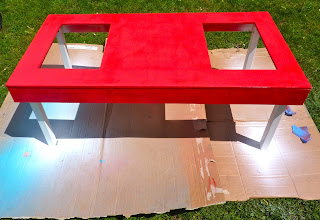 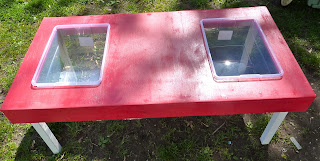 Here is the second table, we chose sea green for this one, it will be kept down in the sensory room in the basement.

Here the boys are having fun with the sensory table on the back porch before it got brought down to the school room. I have a feeling the sensory tables will be used on a daily basis, both of the little boys and even the older boys have so much fun playing in them!
The one in the basement has 3 bins to put things in, I am using each of the side bins as my filler and for the play area and the middle tub as storage for all the tools that can be used! 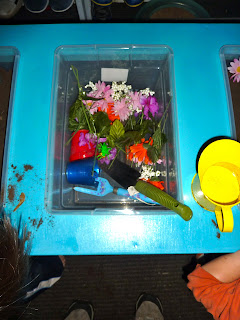 Ethan had lots of fun pretending to “plant” flowers! 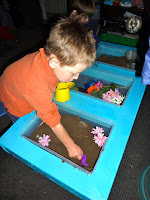 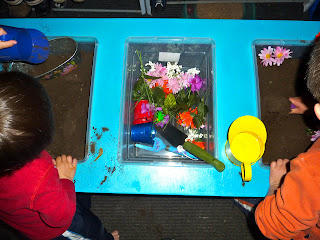 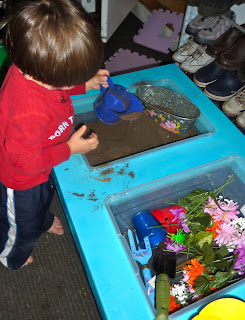 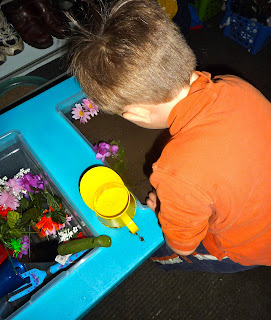 We counted the petals on the flowers, counted how many scoops it took to fill each container and talked about what colors each flower was. 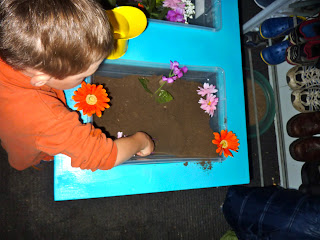 Stop by and check out all the great blogs I am linked up with for other wonderful ideas to try with your kids!