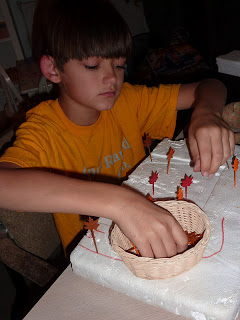 A peek at our Montessori Homeschool

I hope everyone had a blessed and wonderful Thanksgiving!!  We were able to spend the holiday with a lot of family that all love close to home, and Jake got the day off, so I don’t think I could have asked for more!! We had a little bit of a shortened school last week with Thanksgiving on Thursday, but still managed to get a lot accomplished! We did a lot of Thanksgiving activities and crafts, and I am slowly working on getting those posts together, I know it will be after Thanksgiving, but I suppose better late than never, maybe someone can use them next year 🙂
Every year for Easter my mother in law sends us a ham from the Honey Baked Ham Company, I decided that the styrofoam container that it came in could be used for something in the future, and I was right! The lid is a very packed styrofoam and it makes it quite a bit harder to put the leaf food picks into than most styrofoam. Cody decided to give it a try. 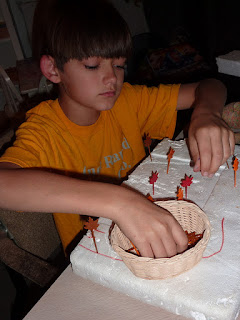 This is one activity that gets a lot of use.  Ethan loves to hammer the tacks, the older boys however realized that your really don’t need to use the hammer you can just push the tacks in lol. Also in case anyone was wondering why Ethan is usually half dressed in the pictures, it is because he does not like to be fully dressed due to sensory reasons I assume and I don’t fight him, I have really learned to pick and choose my battles with the kids, and unless we have to go somewhere or he’s going outside and it’s colder I figure he knows how he is most comfortable!  It’s funny how each child can be so different, Gabe on the other hand is the complete opposite, he will get very upset if I even forget to put his socks on with his clothes in the morning 🙂 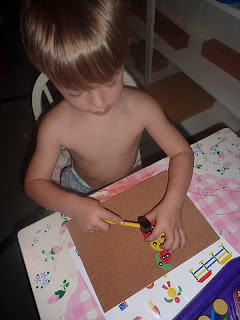 Anthony and the trains he made.  He lost both of his front teeth recently, I love it!! 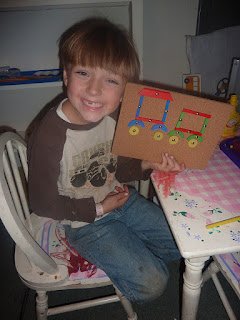 Cody and the person he made! 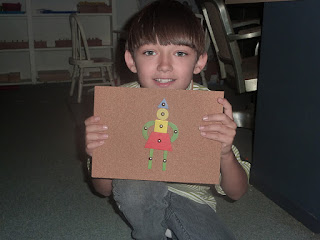 I noticed that the sensorial materials were not getting used much, so we have been working on new presentations to hopefully spark some more interest in the materials again! I showed the boys a few extensions to use with the knobless cylinders last week, and they worked with them 3 of our 4 work days last week. Yea!  This week we are will be working with the Thermic Tablets,  3rd Fabric Set and  Color Gradation set. 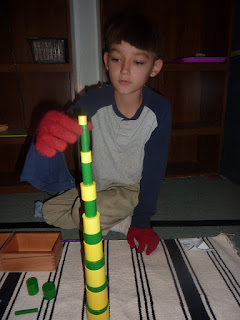 Anthony started by building his tower on the floor, only to realize that the carpet was not a flat enough surface. His tower kept falling over. 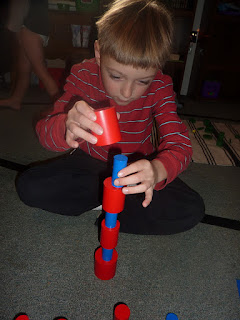 So he decided to move onto the table, and was able to build higher. 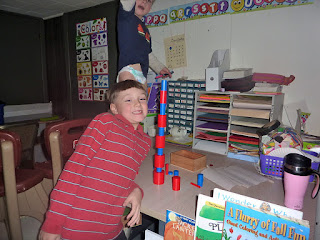 Ethan watched everyone else, and decided to make his own 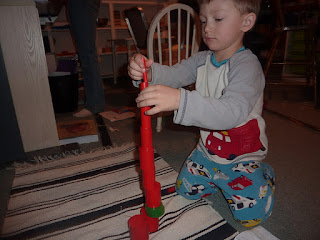 Cody proud of his tower! 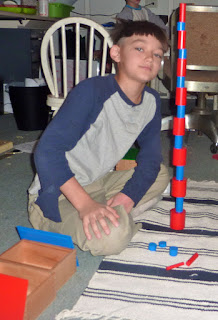 I’m not sure if Cody or Anthony made this, Both of the boys were taking pictures of each others work when completed while I was working with Dustin.

Gabe worked on this activity a couple times but it wasn’t a favorite, so I probably won’t put it out again for a while. 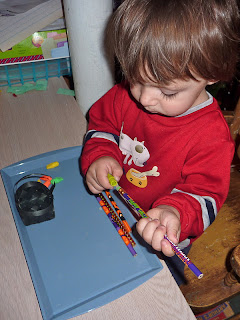 He worked very hard to get the erasers on. 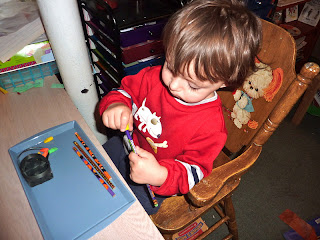 The latches board is an all time favorite by all the little ones! It will keep them occupied for a while. 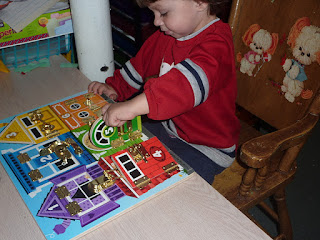 Ethan has started his sensitive period for writing and has been really enjoying writing his numbers and letters in the sand. My next goal is to make a gel bag for writing. 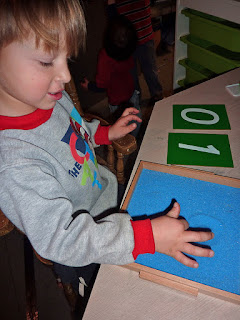 He has surprised me with how carefully he will shake it when he’s done trying not to spill any. 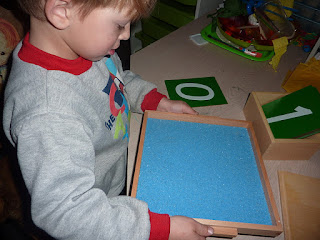 This is one of the his new creations he has been drawing all week, his first drawing of a person! I can’t get over how precious those drawings are, the legs coming out of the head are just adorable! 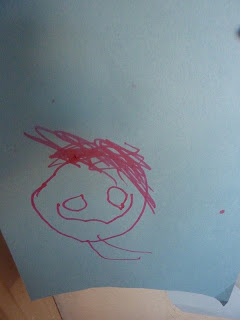 I am linking up with:
Montessori Monday
Hosted by
Living Montessori Now & One Hook Wonder
and
Tot School

How We Reuse Our Preschool Supplies