Christian Liberty Press is another well know Christian Homeschool resource. We have used a few of their products in the past and have really enjoyed them. They offer Christ-centered curriculum that will prepare your children for service within His kingdom. We were blessed with a copy of Mr. Pipes and The British Hymn Makers in e-book format for review. 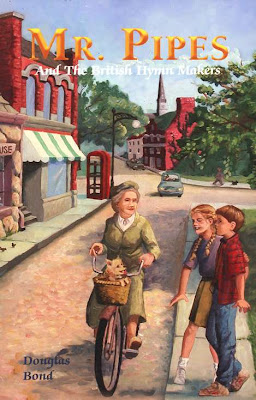 Mr. Pipes and The British Hymn Makers is the first book of a 4 part series, written by Douglas Bond, it is a 242 page e-book. It teaches children about some of the greatest British hymn makers from history, music appreciation, the value of traditional worship and praise, and much more.

Jack and Annie are two of the main characters in the book, they have come to England for the summer and are not real happy with how “outdated” the town is, and with the fact that people drive on the wrong side of the road. Their mother is busy working and the children are left to keep them selves busy. The decide to explore the town, and much to their surprise they actually enjoy exploring. During that time they meet a couple of the towns people, they decide to find out who is playing the organ, which is when they meet and befriend the local organ player Mr. Pipes.

The children go with Mr. Pipes on an adventure, during which the children really form a friendship with Mr. Pipes and after which time the children decide to continue to go on adventures with him. During each of these adventures Mr. Pipes tells stories to the children, each about a famous British hymn writer, some of the adventures they embark on are the places the hymn makers story takes place they are learning about. During their adventures with Mr. Pipes the children learn of many great hymns and more about the people who wrote them. Learning about the hymn makers helps them to understand the real value of worship and praise, and strengthens their relationship with Christ who they did not know much about before meeting Mr. Pipes. Included at the end of each chapter is the sheet music for some hymns from the British hymn writer discussed in the chapter. The story also includes a picture for each chapter they are beautiful and detailed pictures, and Anthony(3rd grade) and Cody (5th grade) really enjoyed looking at them, when I would tell them there was a picture both of the would come running up!

I absolutely loved this book, the detail that goes into the story and the relationship the children form with Mr. Pipes is just amazing! The way the Jack and Annie really were not looking forward to their summer and then how their summer really turned out was a great example of how you cannot judge by the cover, you must really understand something before passing judgment and it was something we had quite a few discussions on. I also really enjoyed the values of worship and praise this book teaches, something you don’t find in many books now a days. My children all learned and retained much of the information about the different hymn makers through history, for each chapter I had the kids draw a picture about the chapter, and when we finished the chapter each of the kids wrote a paragraph about the British hymn maker. Serena told me that she couldn’t believe how much detail was put into the story, it made her feel as if she was right in the story.

Christian Liberty Press Offers 3 other books in the Mr. Pipes series that are sequels to Mr. Pipes and The British Hymn Makers. In all the books, Mr. Pipes takes the children on adventures while telling them stories and values of hymns each from a specific period of time.

Each of the books is about 300 pages and according to the website is recommended for a 7th-10th graders. I will say however, I  read aloud with my older boys who are in 3rd, 5th, and 7th grade and would ask them questions after each chapter to see how well they were picking up what was being read. Even my 3rd grader was really understanding the story and what was really going on, so I would recommend to any child who can sit through being read chapter books. Each of the chapters is quite long so we just made sure we did our Family Time Fitness exercises to get their energy out before the story and I also let kids draw pictures of each chapter while I read and it worked fine.

Christian Liberty Press offers a free sample of the book.

Mr Pipes and The British Hymn Makers $9.89:  The first book in the series, the story of two teens that while on vacation in England befriend and English man named Mr. Pipes. The children learn about Famous British Hymn Writers through the journeys they embark on. They also learn the value of traditional worship and praise.

Mr Pipes and Psalms and Hymns of the Reformation $9.89: Two teens and their friend, Mr. Pipes, as they retrace the steps of some of the great hymn writers of the sixteenth century. Along the way, they learn the historical background s of several hymns from the Reformation Era.
Mr Pipes Comes to America $9.89: Annie and Drew continue their adventures with Mr. Pipes visits America and teaches them great hymns (and the lives of those who wrote them) from American history.

The Acciental Voyage $9.89:  This is the last book in the Mr. Pipes series. Mr. Pipes takes his friends to Europe, while together discovering the hymns of the early centuries. During their adventures they learn more about 16 different hymn writers from the early church.

Each of the books are also available as a PDF download for $8.79.

**COUPON CODE: Now Through Labor Day Christian Liberty Press is offering an extra 5% off your order when entering the coupon code SUMMER12**

You can also find Christian Liberty Press on Facebook

Stop over and see what fellow crew members had to say about Mr.Pipes and The British Hymn Makers below.

Disclaimer: As a member of the Schoolhouse Review Crew I was provided with the PDF file of Mr. Pipes and The British Hymn Makers in return for my honest review of the product. All opinions are the honest opinions of my children or myself.